On the 12th June 2019, the City of Kwinana council voted on resolutions regarding the Community Consultation Program.

The unanimous decision (8 votes in favor, 0 against) ensures the City maintains its long standing opposition against the Boomerang Road and Banksia Road sand mines, and that the City will only consider the Community Consultation Program once all relevant approvals have been granted including the most up-to-date information. Currency-of-information and accuracy is a big issue plaguing the sand mine proposals by Hanson.

It should be noted that whilst the Program was presented behind closed doors in a limited forum of Officers in 2015, we do in fact challenge if it was ever presented to Council since there is no record of Council resolving to adopt the Community Consultation Program.

Since Hanson have never consulted the community, there has been no community input to the consultation program to ensure it adequately addresses the concerns relating to their health, safety and environment. Decisions have been made and approvals have been granted without the community’s involvement. Consultation cannot occur retrospectively and this is a serious failing of the DWER, DMP & Hanson.

To-date there has been no review by the City or by the Community. The draft however highlights the growing evidence relating to Hansons intentions to operate both sand mines concurrently as one integrated operation, who now seek a combined community consultation program. This is significant since Hanson have pursued approvals for both sites in isolation, by different departments under different tenure, with multiple secondary approvals being granted in a piecemeal fashion where there have been no considerations to the significant environmental impacts of the proposals as a whole.

See for the first time below in now publicly available documentation where Rocla (Hanson) represent both mines together. All through the approvals process they have been very separate to limit the scope being reviewed and assessed: 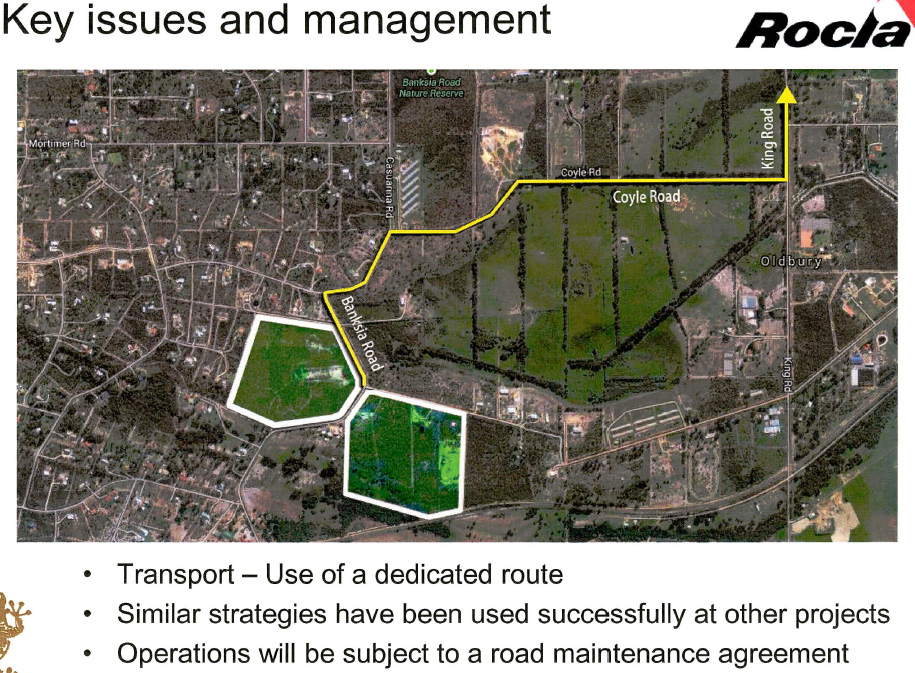 The CWPA provided a submission and presented it to Council prior to the briefing:

The Community Consultation Program has been the exact opposite, a Community Disengagement Program. The community has been kept in the dark for as long as Hanson and Rocla have had their hands on the Banksia Road site.

Due to ongoing community concern, and a significant number of incorrect and misleading statements by the Proponent regarding community consultation, the CWPA on behalf of all residents undertook their own independent consultation, walking the streets and door knocking from August to October in 2018. The focus was on the Banksia Road site and the results were extremely alarming, not one person had been consulted who lived within the 500 metre EPA recommended buffer zone, there has been no consultation process.

We can tell you none of this is true.

Within the proponent’s documents, a number of incorrect claims have been made about the City of Kwinana’s formal endorsement or consent to parts of the proposal including;

As you are aware the City has had no such involvement and made no such agreements with the current Proponent. In September 2018 the CWPA reviewed the Sand Mining Proposal (version 7) and provided to the City with an Analysis of Statements relating to Community Consultation, identifying a significant number of statements that falsely implied community consultation had occurred.

Approvals for each site were sought in isolation by the Proponent, through different Departments, without any consideration to the cumulative impacts. Now suddenly they want to combine them for the Community Consultation group because it would reduce their costs and limit the input and oversight of the Community. This is the very reason we are campaigning to have the sites reassessed as one operation, including the environmental impacts.

Attachment C, a Rocla presentation by Vern Newton, was never presented to Council nor the Community and instead was presented in a closed group by surprise.

Regarding the Officer Recommendations presented in the Report, we ask the Council to accept them with the following amendment.

<see support document #2 below for table>

We ask the City to consider the long history and false claims of community consultation, and take a strong stance in ensuring the Community Consultation Program remains in the interests of the City and its Residents.

That Council authorise the CEO to advise Hanson Construction Materials Pty Ltd of the following: